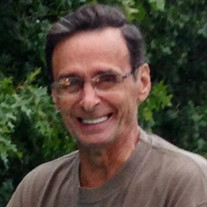 Leroy James Sisco, of Charlotte, a father who believed that challenging his children made them all better people, passed away on June 5, 2020 in Lansing following a lengthy illness at the age of 76. He was born on November 23, 1943 to Wilbur and Dorothy (Bailey) Sisco in Lansing , MI. Leroy grew up in financially tough times. He would often tell his family he was so poor he had a bike, but it didn't have a chain or a seat. The challenges he faced helped him learn what he wanted to be as a parent. Following his graduation from high school, Leroy served in the U.S Navy from October of 1961 to November of 1964. In August of 1967 he met a girl named Linda Carpenter on a blind date. Three months later they were married on October 14, 1967 at the Grovenburg Church, in Holt, MI. Leroy was a family man who was most proud of his family. Above all else he worked to provide a good life for his wife and children. His son described him as a "Derivative"...he grew up with the goal to give his kids the experiences he never had as a child. He was the dad and grandpa who wasn't afraid to hand out hugs and kisses. There were many great experiences he shared with his family. There were many days spent boating and fishing. His sons remember numerous trips to Cedar Point and Kings Island amusement parks. He road the roller coasters to keep up with his kids, and even took part in the early Karaoke studios at the parks recording more than one "surprising" tune over the years. There were tennis games that helped teach the lesson he wouldn't let you win, you had to earn the win, and numerous other games with the same lesson. His son's Shon and Ryan recall how they challenged each other to improve each other in many circumstances. As Leroy's grandchildren grew up board games such as Sorry gave way to video games such as Soulcaliber where the same competitive challenge was put forth from Grandpa to earn their victory. Leroy set the standard for others in the family to achieve with a high level work ethic. That was demonstrated over and over through his work for GM as a supervising foreman. He traveled to numerous plants to help solve production problems and fix them. He earned a reputation within the company of being a fair but stern supervisor who always got the job done. His care for his family and his attention to detail was never more evident than the past few weeks of his life. As his illness progressed, Leroy's number one goal was to make sure that his wife Linda was provided for. His numerous conversations reviewing plans with his family kept him going much longer than anyone ever expected. Leroy is survived by his two sons, Shon Sisco and his wife Lara, , Ryan Sisco and his wife Christy; Daughter Tiffany Miller and her husband Greg; 17 grandchildren; brother, Carl Sisco; and sister, Lillian (Randy) Cordell. He was preceded in death by his brother Wilbur C Sisco, father, Wilbur Vernon Sisco, and mother, Dorothy Loretta Sisco. A memorial service will be held Friday June 12th at the Pray Funeral Home at 12:00 noon. Interment will follow at Dimondale Cemetery. The family will receive visitors before the service from 10 am to 12 noon. Due to current quarantine and sheltering guidelines, the funeral home staff will guide guests through visitation and funeral service for Leroy to assure the safety of family and guests while complying with the current Executive Orders for the State of Michigan. Guests will be asked to wear a face mask. Pray Funeral Home will have masks available for those who may not have one. The funeral service will also be webcast so you may watch it from any computer, smartphone, or mobile device that has internet access. Go to www.prayfuneral.com, click on Leroy's tribute, then click on Photos & videos from your computer (or Media from your smart phone). Just prior to the beginning of the service, a link will appear on this page to watch the webcast. Friends and extended family members may send flower arrangements to the service as a show of your support for the family if you are not able to attend. If desired, the family suggests memorial contributions to Hospice of Lansing, Stoneliegh Residence.

Leroy James Sisco, of Charlotte, a father who believed that challenging his children made them all better people, passed away on June 5, 2020 in Lansing following a lengthy illness at the age of 76. He was born on November 23, 1943 to Wilbur... View Obituary & Service Information

The family of Leroy James Sisco created this Life Tributes page to make it easy to share your memories.

Leroy James Sisco, of Charlotte, a father who believed that challenging...

Send flowers to the Sisco family.