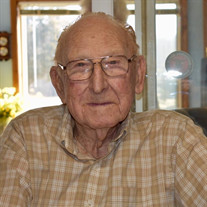 Marlin Elmer Gloor, 99, of Charlotte, died Saturday, January 12, 2019. He was just three months shy of his 100th birthday. Marlin was born April 15, 1919 on the family farm in Hamlet, IN to Freed and Edith (Herbst) Gloor. He graduated from LaPorte High School in 1937. Following graduation Marlin went on to proudly serve his country during WWII. He served as an airplane and engine mechanic and later as a pilot. Over his lifetime Marlin was a warrior; overcoming numerous very serious health scares from meningitis to cancer before advancement of medicine today. On October 25, 1944 Marlin married Nadine Parthun and together spent the next 67 years creating their legacy together before her passing in 2012. Growing up on a farm in Northern Indiana Marlin grew to love tractors. Following his service in WWII Marlin went to work at Allis Chalmers in parts, service, sales and management before leaving the company in 1976. Marlin later went on to purchase Williams Farm Machinery. He co-owned the business until the late 1980s. Following his retirement Marlin started to restore tractors. Marlin also enjoyed traveling all around the United States with his wife in their motorhome, fishing, hunting, and working on and flying his airplane with his children. Marlin’s biggest passion in life was his family. Marlin is survived by his loving family, sons, Edward (Charlotte) Gloor of Holland, PA, David (Michelle) Gloor of Charlotte, MI; 4 grandchildren; and 9 great-grandchildren. Marlin was predeceased by his wife Nadine; siblings, Marcella Gloor, Marshall Gloor, and Emil Gloor; and his parents. Friends are encouraged to support Marlin’s family at visitation and funeral services. Funeral services are Wednesday, January 16, 2019, 2:00 p.m. at Pray Funeral Home in Charlotte with Pastor Michael Rysko officiating. Visitation will be held two hours prior to the service from 12 Noon until 2:00 p.m. If desired, the family suggests memorial contributions to The University of Michigan Rogel Cancer Center. Friends and family are encouraged to share memories of Marlin on his Tribute Page at www.PrayFuneral.com. The family is in the care of Pray Funeral Home, Charlotte.

Marlin Elmer Gloor, 99, of Charlotte, died Saturday, January 12, 2019. He was just three months shy of his 100th birthday. Marlin was born April 15, 1919 on the family farm in Hamlet, IN to Freed and Edith (Herbst) Gloor. He graduated from... View Obituary & Service Information

The family of Marlin Elmer Gloor created this Life Tributes page to make it easy to share your memories.

Send flowers to the Gloor family.