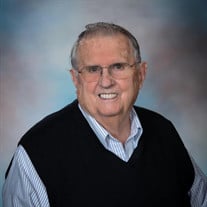 It is with a heavy heart that we share the news that Maurice "Skip" Dowding, the founder of Dowding Industries, passed away November 13, 2021, surrounded by family. He was 89 years young. Skip was born in Albion, Michigan on March 25, 1932 to Vern and Freda (Mohler) Dowding. He was the second of their five children. Skip graduated from Olivet High School in 1950. Due to his love of airplanes, he began flying in 1947 at age 15, before he even received his driver's license. Three years after high school Skip joined the Army where he served two years in Alaska, at Big Delta Arctic Test Center as a communication specialist. Skip fell in love with Alaska and didn't want to leave! When his service ended in 1955, he decided to remain in Alaska where he worked for the City of Fairbanks. After his return he was employed by Olivet Machine Tool Engineering Company as a tool and die maker. He worked at several other small tool shops in the area before deciding he wanted to embark upon the journey of starting his own business. Skip had the idea, if he started his own company, he would have endless amounts of free time to spend hunting and fishing. Little did he know that his love for work would replace those activities! Skip started Dowding Tool Products in 1965; a small tool and die shop out of a local garage, then he moved to the Narrow Lake facility. His entrepreneurial spirit is what drove him to keep pursuing new inventions, that he hoped would better the world. He grew to have numerous manufacturing locations in Albion, Devereaux, Marshall, Springport, Battle Creek, Hiawatha (Iowa) and Dunn (North Carolina). In 1997 Skip consolidated the Michigan facilities into one plant in Eaton Rapids, Michigan. The business would continue to grow to include a campus of three production facilities and employ over 200 team members. Skip's love of flying was recognized both far and wide, as he logged over 14,000 hours traveling all over the United States. He absolutely loved to be in the clouds! He especially cherished his time spent flying and exploring the vast Alaskan wilderness with his younger brother, Roger who was a Bush Pilot. Skip was well-known for his mercy flights that helped numerous people be transferred to the necessary medical facilities, such as Mayo Clinic and Cleveland Clinic. He treasured his ability to share his love of flying by being a flight instructor where he was able to pass on his vast knowledge and experience while teaching hundreds of people how to fly. He maintained his pilots license and instructors rating up until the day he passed. In 1956 Skip met the love of his life, Karen Norris, his sister's best friend. They were joined in marriage on April 19, 1958. Skip and Karen built an incredible life and family! They traveled all over the world and lived life to the fullest. Their unconditional love and commitment to each other is a relationship goal for all of us to model. They were blessed with three children and were married for almost 64 wonderful years. Skip was also known for his unwavering faith in God. He assisted numerous churches in the area to grow and flourish. Skip was known for his kind and generous heart. He was an eternal encourager and always saw the good in people. As so many heartfelt stories of his acts of kindness are flooding into the family. We realize even more, what a special soul he had. Skip lived a life of honoring God; in all ways and treated people with love and respect. His passion was to support various missions in their quest to spread Gods word. The family has lost their cornerstone, the community has lost a visionary, and the world has lost an astounding man. Those of us who have been fortunate enough to know and work with Skip have lost a dear friend and an inspiring mentor. Skip leaves behind a company that he dearly loved and his spirit will forever be the foundation of Dowding Industries. He left this world a better place. He was forever an entrepreneur and actively worked doing what he loved. In the last few years, he was working on developing a wheelchair that would help people stand, he was working on this project until the very end. Dowding Industries has a mantra that came directly from Skip, "we build people, not just parts", which was based on his faith and love of God. That's what he did for 56 years of business; he truly believed it, and more importantly he lived it every day of his life! Dowding's tag line "Making an Impact, Leaving a Legacy." is a true reflection of his time here on earth. We will honor his memory by dedicating ourselves to continuing the work he loved so much. Skip was preceded in death by his parents, Vern and Freda Dowding, son, Mark Dowding, brothers, Roger and David Dowding. He is survived by his loving wife, Karen, his siblings Sam Dowding and Janice (Mitch) Johnson, daughters, Chris (Jeff) Metts and Mary Lu Dowding (Greg) Harris and Grandchildren Jamie (Monte) Collins, Shasta Delong, Johnny (Cassie) Knaggs, Victoria Wilson (Lex Osumenya) Ekaterina Harris, and Liam Dowding. He is also survived by great-grandchildren: Jaycob, Christian and Noah DeLong, Brock Bigger, Makena and Charlotte Collins, Amari Osumenya and Kamdyn Knaggs. We are planning a celebration of Skip's extraordinary life that will be held Tuesday, November 30, 2021 at Eagle Eye Golf Club, 15500 Chandler Rd., Bath Twp, Michigan. A service is planned for 2:00 pm and an Open House will follow from 3-6 pm. Charities that are closest to Skip's heart are the following: Mission Educ-Arte, Cancun, MX and Soaring Unlimited Women's Health and Birthing Center, Cap Haitien, Haiti. Donations can be made at the open house or mailed to Pray Funeral Home.

It is with a heavy heart that we share the news that Maurice "Skip" Dowding, the founder of Dowding Industries, passed away November 13, 2021, surrounded by family. He was 89 years young. Skip was born in Albion, Michigan on March 25, 1932... View Obituary & Service Information

The family of Maurice 'Skip' Dowding created this Life Tributes page to make it easy to share your memories.

It is with a heavy heart that we share the news that Maurice...

Send flowers to the Dowding family.