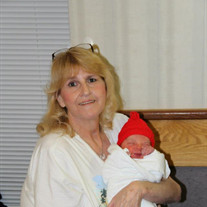 The Lord fulfilled His promise to His faithful servant Patricia Ann (Evans) Villanueva-Dimond and placed her hand into His on April 8, 2020. Patti battled for 69 years on this earth and has finally found rest with our Lord. The Lord blessed... View Obituary & Service Information

The Lord fulfilled His promise to His faithful servant Patricia...

Customized sympathy cards. Mailed for you.