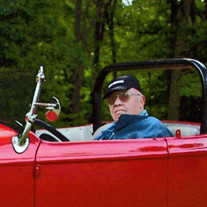 Philip Arlan Crowner, 82, an adventurous man who "did it his way," died Saturday, May 18, 2019 in Lansing. Phil was born May 8, 1937 in Lansing, the son of Charles A. and Marjorie Elouise (Shaffer) Crowner. At the age of 16, Phil started racing stock cars at Capital City Speedway, a passion that gave birth to a lifelong "need for speed." Phil's racing hobby saw him behind the wheel of several cars throughout the years, especially his beloved 1932 Ford Street Rod. He shared his talents as a mechanic in his shop on Lansing Rd., even fixing the broken-down tour bus for the The Who. Phil and his brother Dave were founding members of the local Headers Car Club, and could often be spotted at cars shows, auctions, and checking in on projects at Eaton Auto Body. Phil also drove trucks for Leaseway, as well as cement trucks, and worked briefly for Oldsmobile. Phil demonstrated stern love and guidance, not only to his nieces and nephews, but also mentoring countless troubled teens, thus positively impacting many lives. He enjoyed camping trips up north with family and friends. Many will remember Phil's ability to "say it like it is," and always being a man of his word. Phil is survived by his sister, Jane (Davide) Crowner-Friedman of Dimondale; sister-in-law, Betty Crowner of Charlotte; nieces and nephews, Larry (Amy) Crowner of Olivet, Catherine Crowner of Charlotte, Mike (Mallory) Crowner of Charlotte, and Christian (Sarah) Smucker of Portage; and several extended family members. He was predeceased by his parents, and his brother, David Arthur Crowner. Friends are encouraged to support Phil's family at a Memorial Service on Thursday, May 30, 2019 at 2:00 p.m. at Pray Funeral Home, Charlotte. Visitation will be two hours prior to the service, from 12:00 - 2:00 p.m. Memorial contributions may be made to the Shriner’s Hospital for Children at www.shrinershospitalsforchildren.org/shc or St. Jude’s Children’s Hospital at www.stjude.org. Friends and family are encouraged to share memories of Philip on his Tribute Page at www.PrayFuneral.com . The family is in the care of Pray Funeral Home, Charlotte.

Philip Arlan Crowner, 82, an adventurous man who "did it his way," died Saturday, May 18, 2019 in Lansing. Phil was born May 8, 1937 in Lansing, the son of Charles A. and Marjorie Elouise (Shaffer) Crowner. At the age of 16, Phil started racing... View Obituary & Service Information

The family of Philip Arlan Crowner created this Life Tributes page to make it easy to share your memories.

Philip Arlan Crowner, 82, an adventurous man who &quot;did it his...

Send flowers to the Crowner family.