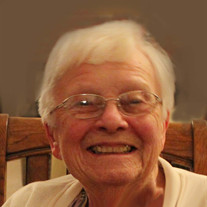 Rachel Genevieve Hebner, 95, of Dimondale, a true original with a smile you'll never forget, passed away on January 29, 2021 in Charlotte, MI. Rachel was raised in Battle Creek by her adopted parents, Fred and Retta (Briggs) Reams. She graduated from Battle Creek Lakeview High School. At the age of 18, she made one of her few trips away from home to travel with a friend to Keesler Air Force Base in Gulfport, Mississippi. While there, her friend's husband arranged a blind date for her, which became the night she met her future husband, Francis Hebner. Within the year, Rachel traveled back to Gulfport to marry Francis. They later returned to Michigan with Francis' transfer to Wurtsmith Air Force Base in Oscoda during the Korean War. After Rachel and Francis moved to the Lansing area, Rachel worked as a school secretary for the Lansing Public School System, her first position being at Lincoln Elementary. She loved her time there, always feeling that the school felt like one big family. After Lincoln School closed she moved to the Reo Elementary School until her retirement in the early 1980's. Rachel was a strong woman with a great sense of humor. She could tell a story like no other, a talent she enjoyed immensely. She was a "people person" who could strike up a conversation with anyone anywhere. In her recent years she became a voracious reader, sometimes reading two books in a day. Her favorite genre was murder mysteries, which may have helped her develop her story telling abilities. She was most proud of being a mother and grandmother. One of her grandchildren said, "Grandma had a distinctive smile." The residents of Hope Landing, where she spent her last years, agreed and nicknamed her "The Smiling Lady." Rachel is survived by her daughter, Janice (Larry) McQuay; son, Stuart (Ellie) Hebner; grandchildren Darrin (Susan) Hebner, Angie (Rob) Smith, Edie McQuay, Tammy (Ryan) Halsey, Tina (Tom) Dunsmore, Teresa (Bryce) Madill, Kellye (Joey) Youngs, Justin (Sara) Hodges, Ryan (Jennifer) Hodges; great-grandchildren Alexis, Kyle, Larry, Jack, Allysa, Ashley, Mandy, Jeffrey, Cooper, Sarah, Gracelyn, Cameron, Sebastian, Aliya, Hayden, and Duke, and 7 great-great-grandchildren. She was preceded in death by her birth parents, John and Millie (Hamilton) Reams; her adopted parents Fred and Retta (Briggs) Reams; her brothers, Lee Reams and Bob Reams; and sisters, Ada Whipple, Gertrude McConnell, and Ruth Harden. The family will be receiving visitors on Monday February 1, 2021 from 6:00 PM to 8:00 PM at the Pray Funeral Home. The Pray staff will guide guests through visitation. Guests will be required to wear masks and observe social distance guidelines. The family has suggested that memorial contributions be made to the Parkinson's Foundation. Family and friends are encouraged to share remembrances and condolences online on Rachel's Tribute Page at www.prayfuneral.com. The family is in the care of Pray Funeral Home, Charlotte, MI.

Rachel Genevieve Hebner, 95, of Dimondale, a true original with a smile you'll never forget, passed away on January 29, 2021 in Charlotte, MI. Rachel was raised in Battle Creek by her adopted parents, Fred and Retta (Briggs) Reams. She graduated... View Obituary & Service Information

The family of Rachel Genevieve Hebner created this Life Tributes page to make it easy to share your memories.

Rachel Genevieve Hebner, 95, of Dimondale, a true original with...

Send flowers to the Hebner family.