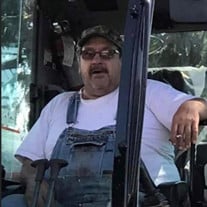 Richard Dale Rumsey, Jr, was peacefully called home on April 22, 2022. Richard was born August 20, 1961 in Battle Creek, MI to Richard Dale Rumsey, Sr. and Nancy (Dolbee) Rumsey. If you knew Richard, you knew he was a friend to all and was always willing to lend a hand during a time of need. Richard was a man who brought smiles and tears of laughter to many of us, and he never met a stranger. Richard went to work right after attending Waverly High School at his parent’s underground construction company, Rumsey & Sons. From laying pipe to equipment operator, Richard did it all. You name it, Richard has done it. He worked for many construction companies all over Michigan, Florida, and Oklahoma. In later years he really enjoyed snowplowing with the guys including his father and son, Ricky. The highlight of his most recent years was spending time with his grandchildren, where he earned the title of “Baby Whisperer.” His greatest passion was spending time "hanging-out" enjoying life with his family, friends and especially his grandbabies. In his spare-time he also enjoyed tinkering in the shop and woodworking. He had a great sense of humor that rolled over into his gift to tell great stories. Maybe you were fortunate to have received one of his unique walking sticks or a story of his adventurous, free-spirited life over the years. Richard was preceded in death by his brother, Rodney Rumsey; and grandparents. He is survived by his sons, Wesley Hoffman, Richard Dale Rumsey III; step-daughter, Ashley Nieto; grandchildren, Ryder Rumsey, Payton Nieto-Cruz, Imani Davis, and Kaedence Davis; life-long special friend, Jenny Kline; parents, Richard and Nancy (Dolbee) Rumsey; brothers, Roland (Terry) Rumsey, Robert Rumsey; sister, Lisa (Doug) Balderson; sister-in-law, Lisa (Rodney) Rumsey; and many nieces/nephews and great-nieces/nephews. Richard's family would like to extend a heartfelt thank you to everyone for their kind thoughts, prayers, compassion, and meals during this difficult time. Come join us to celebrate his life, in sharing stories and memories you have with him one last time together on Saturday, April 30, 2022 10:00 am visitation and 11:00 am memorial services at Pray Funeral Home, 401 W. Seminary St. Charlotte, MI 48813. The memorial service will be webcast so you may watch it from any computer, smartphone, or mobile device that has internet access. Go to www.prayfuneral.com, click on his tribute, then click on Photos & videos from your computer (or Media from your smart phone). Just prior to the beginning of the service, a link will appear on this page to watch the webcast. A private burial will be held at a later date. If desired, in lieu of flowers, Richard's children would appreciate donations for his services may be made to Pray Funeral Home or to Richard Rumsey Jr, End of Life Fund https://gofund.me/Oc1e61e9. Friends and family are encouraged to support his family by sharing memories on his tribute page at www.prayfuneral.com. The family is in the care of Pray Funeral Home.

Richard Dale Rumsey, Jr, was peacefully called home on April 22, 2022. Richard was born August 20, 1961 in Battle Creek, MI to Richard Dale Rumsey, Sr. and Nancy (Dolbee) Rumsey. If you knew Richard, you knew he was a friend to all and was always... View Obituary & Service Information

The family of Richard Dale Rumsey Jr. created this Life Tributes page to make it easy to share your memories.

Send flowers to the Rumsey family.