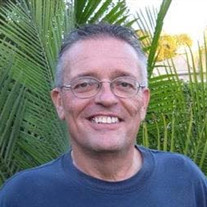 Robert Burt Clouse, 71, a good natured man with a big smile and a great sense of humor, died Monday, November 30, 2020 in Lansing. Bob was born November 23, 1949 in Lansing, MI, the son of Clarence James and Margydell (Fyke) Clouse. He proudly served in the U.S. Navy as a boilerman aboard the USS Stickell during the Vietnam War. Upon his return, he settled into family life and went to work in the powerhouse at Motor Wheel in Lansing, until an injury disabled him and forced his retirement. Although unable to work, Bob gained treasured time with his son and daughter. He enjoyed taking Corey to Ice Hockey practice and Holly to basketball and softball events. Later, he enjoyed his role as "Papa" to his grandchildren. Although he moved to Florida in 2005, he always found time to call his kids, and looked forward to any opportunity to spend time with family. In his spare time, Bob could be found collecting and rigging up various electronics at his home or on the road enjoying riding his motorcycle. Perhaps greatest of his passions was his dedication to the Detroit Red Wings, being a lifelong fan. Bob is survived by his son, Corey (Kristy) Clouse; daughter, Holly (fiancé Daniel Grunau) Clouse; granddaughters, Addison and Brooklyn Clouse; siblings, Susan (Dennis) Lea, Linda (Norman) Clark, and Kalven (Sheri) Horton; step-siblings, Jim Woodworth and Carol (Steve) Brooks; and many nieces and nephews. He was predeceased by his grandsons, Abel and Jameson Clouse; his parents; his sister, Kathy Roberts; step-brother, Robert "Woody" Woodworth; step-sister-in-law, Joann Woodworth; and nephew, Billy Horton. Visitation and memorial services are Saturday, October 9, 2021. Visitation is 2-3:00 PM with the memorial service at 3:00 PM at Pray Funeral Home. Friends and family are encouraged to share memories of Bob on his Tribute Page at www.PrayFuneral.com. The family is in the care of Pray Funeral Home, Charlotte.

The family of Robert Burt Clouse created this Life Tributes page to make it easy to share your memories.

Robert Burt Clouse, 71, a good natured man with a big smile and...

Send flowers to the Clouse family.