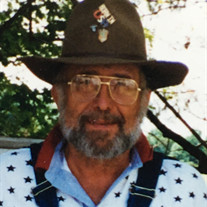 Robert Egbert Thompson, a loving, father, grandfather and friend, of Charlotte, died Wednesday, May 6, 2020 at The Eaton Community Palliative Care. Robert, 83, was born July 3, 1936, in Charlotte, MI the son of Farley and Juanita (Shumaker) Thompson. He graduated from Charlotte high school and later served in the Army National Guard. Robert worked as a Machinist at Diamond Reo and was also a dairy farmer. He then moved to Southern Indiana in 1986 where he started working at the Indiana Department of Natural Resources in the Forestry Department. Following his retirement from the DNR Robert moved back to Michigan to be closer to his family. Roberts hobbies included hunting, his mules, and collecting knives. He loved wearing his bib overalls and being a good ole country boy. In 1952 at the age of 16, he became the second recorded person in Eaton County to tag a white tail buck Robert is survived by his children, Rob Thompson, Jane (Larry) Johnston, Gina (Ross) Himebaugh; 8 grandchildren, Brad Johnston, Larry Johnston, Sarah Schumacher, Aimee Fletcher, Leah Heinze, Maria Heinze, Siera Blain, and Martina Swanson; 16 great-grandchildren; sister, Vonda Stanton; special friends, Dorene Bearndt and Tony Kidd, and the members of the Enon Baptist Church in Salem, Indiana. He was predeceased by his parents; sister, Eva; and nephew, Eric Stanton. John 11:25 Jesus said unto her, I am the resurrection, and the life: he that believeth in me, though he were dead, yet shall he live. The Thompson family is going to be having a memorial service for Robert at a later date in Indiana at the Enon Baptist Church. Friends and family are encouraged to share memories of Robert on his Tribute Page at www.PrayFuneral.com. The family is in the care of Pray Funeral Home, Charlotte.

The family of Robert Egbert Thompson created this Life Tributes page to make it easy to share your memories.

Send flowers to the Thompson family.