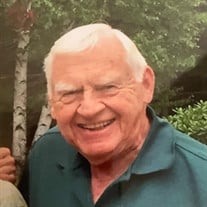 Rod Yates, age 94, died October 16 at Hope Landing, in Charlotte Michigan, due to complications of Covid-19. Born September 30, 1927 to Anne Van Dyk and Joseph Maltby "JM" Yates, Rod lived nearly all his 94 years in Charlotte. His childhood home at 313 East Harris was next door to the Hayes Green Beach Hospital. After graduating from CHS in 1945 he attended Michigan State College, earning a mechanical engineering degree in 1949. He met Joyce Cridler that summer at the Barlow Lake roller rink near her home of Middleville and they married in 1951. Rod started a career with General Motors in Grand Rapids after college. In 1953 he left GM to take over the business from his ailing father and moved Joyce and baby Susan to Charlotte. Yates Hardware proudly served customers at 116 East Lovett from 1953 to 1999. Rod's commitment to customer service and quality merchandise earned him many loyal customers. He was known for his engineering knowledge and ability to explain to customers how to repair anything. With a machine shop in the back of the hardware he would gladly make parts for customers if one could not be found. Rod was a lifetime Rotarian and past president. He was active in multiple community organizations. Rod, Joyce and their girls loved to camp in Ludington State Park and to ski at Caberfae with other local families. After retirement Rod and Joyce took several memorable well-earned vacations and then settled in as snowbirds in Venice, Florida where Rod co-chaired the bicycle and the cribbage club and hosted "Michigan" dinners with their Florida friends. Rod and Joyce were very proud of a four generation Spartan legacy. When Joyce returned to college in 1979 he enjoyed premium seats in Spartan Stadium because Joyce's 1949 enrollment provided top-notch student section tickets. All four daughters attended MSU as did three grandchildren, including one with an engineering degree. Rod is survived by daughters, Susan Yates of Williamstown, MA, Judith Yates and Kathryn (Thomas) Cizek of Traverse City; grandchildren include, Chris (Gina Dominguez) of Austin TX, David (Molly Schranz) of Boston, MA, and Libbie Weimer of Durham, NC, Andrew (Nisa) Williams of Seattle, Colin Williams of Traverse City, and Cameron Williams of Seattle, Laura (Michael) Gorman of Grand Forks, ND, and Donovan Cizek of Auburn Hills. He was preceded in death by his grandson, Jesse in 1983; daughter, Cynthia in 2003; great-grandson, Cristobal Weimer in 2013; wife, Joyce in 2017. A brief memorial service will be held on Friday October 22, 2021 at the Pray Funeral Home Gardens at 3:00 PM with visitation following until 5:00 PM. The family welcomes you to this outdoor service and respectfully request you wear a mask. The service will also be webcast so you may watch it from any computer or smart phone by going to Rod’s Tribute Page at www.PrayFuneral.com and click on the webcast button within the photos and videos tab. Guests who prefer to remain in their car should notify Pray Funeral Home for assistance. Please honor his Spartan pride by wearing green and white. In lieu of flowers, memorial contributions may be made in Rod's name to Michigan State University or to the Rotary Club of Charlotte, PO Box 484, Charlotte, MI 48813. The family is in the care of Pray Funeral Home.

The family of Rod Yates created this Life Tributes page to make it easy to share your memories.

Send flowers to the Yates family.