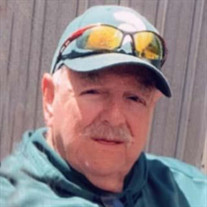 Roger Allen McCartney, 69 of Charlotte, MI, a guy who was humble and didn’t want to talk about himself but loved to share his opinions, died April 13, 2021. One of five boys born to George and Betty (Pruden) McCartney, Roger was born February 24, 1952 in Charlotte, Michigan, and learned from a young age that with a family full of boys he needed to make his voice heard and always found a way to do so. Roger never liked to ask for help, he always wanted to do it himself and he liked to be busy. He was a vocal grandparent in the grandstands at his grandkids sporting events, perhaps even a little infamous with the referees and coaches. Roger enjoyed fishing, hunting, camping, and was a fan of Old Milwaukee. He enjoyed demolition derby at the county fair before getting into stock car dirt track racing. With a huge love for cars, Roger was very proud of the ’82 Firebird that he restored. Over the years, Roger worked at General Motors (Oldsmobile Plant), H & G Steel, Dagget Waste Management, was a janitor at Sebring High School, and was an Airborne Express Delivery Driver. Roger also held the secret to the best charcoal grilled foods, due to his method of how to start the charcoal grill. Roger is survived by his children, Sabrina Halstead, Roger (Linda) McCartney Jr., Stacey Weeks, and Sarah (Mathew) Hebenstreit; step-children, Rob (Kim) Jones, Angela Jones, Melisa (Richard) Keck, Michaelle (Mike) Smalley, and Bobby (Laura) Reed; 15 grandchildren; 23 step-grandchildren; 22 great-grandchildren; brother, Chuck Farr; and several nieces and nephews. He was predeceased by his wife, Kellie McCartney; granddaughter, Alyssa McCartney; brothers, Walt Farr, Leo Farr, and Rick McCartney; step-son, Matthew DeWaters; and his parents. Friends are encouraged to support Roger’s family. Funeral services are Monday, April 19, 4:00 PM at Pray Funeral Home Gardens in Charlotte with Pastor Lloyd Lack officiating. Visitation is 2-4:00 PM on Monday, April 19 prior to the service. Mask, group capacity, and distancing guidelines will be practiced. The funeral will be webcast so you may watch it from any computer, smartphone, or mobile device that has internet access. Go to www.prayfuneral.com, click on Roger’s tribute, then click on Photos and Videos from your computer (or Media from your smart phone). Friends and family are encouraged to share memories of Roger on his Tribute Page at www.PrayFuneral.com. The family is in the care of Pray Funeral Home, Charlotte.

Roger Allen McCartney, 69 of Charlotte, MI, a guy who was humble and didn&#8217;t want to talk about himself but loved to share his opinions, died April 13, 2021. One of five boys born to George and Betty (Pruden) McCartney, Roger was born February... View Obituary & Service Information

The family of Roger Allen McCartney created this Life Tributes page to make it easy to share your memories.

Roger Allen McCartney, 69 of Charlotte, MI, a guy who was humble...

Send flowers to the McCartney family.