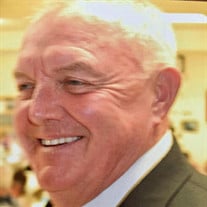 Ronald "Ron" Dale Granger, an adventurous, straight forward and strong husband, father, grandfather, brother and son, died Monday, February 3, 2020. Ron, 72, of Charlotte, was born September 9, 1947, in Charlotte, the son of Robert and Margaret (Townsend) Strang. He was a graduate of Charlotte High School in 1965. Ron later joined the Air Force and served during Vietnam. On April 16, 1971 Ron married Deborah "Debbie" Dunham. Ron was a man that as mentioned was adventurous, after his service in Vietnam he joined the Air National Guard. He worked in Battle Creek as a Weapons and Munition Specialist. He retired as a Master Sergeant in 2001. Ron was referred to by his squad as the Zoo Keeper of the "Party Animals." He was extremely proud of his years serving his country. A passion for blowing things up has always stuck with Ron. He had a term called "backyard ballistics." Ron was an active member of the Eagles, American Legion and VFW, he enjoyed his time being able to socialize with fellow veterans. Ron had a very strong love for panning for gold. He was a member of the GPAA and LDMA. Ron would pan for gold when he would be stationed at different bases around the country, from California, Denver, Georgia and Alaska. He loved finding gemstones, gold and other valuable items. Ron was a very generous man who would collect something valuable and then give it away even if it was extremely valuable. He was always willing to help others. Ron enjoyed hunting, he turkey hunted until he said that it became too easy. He also enjoyed the annual trip to deer camp in the UP with his buddies. Above all Ron loved his family. He was always telling others about them. Ron is survived by his wife, Debbie; children, Jeffrey (Jenny) Granger, Kathryn (Steve) Miller, and Karla (Willie Conroy) Lilly; grandchildren, Kevin Miller, Brooke Miller, Kayla Bruce, and Kyle Lilly; brothers, Patrick (Jody) Strang, Robert Granger, and Dennis (Janice) Strang; mother-in-law, Esther Dunham; brother-in-laws, Frank (Sue) Dunham, Michael Dunham, John (Rita) Dunham, and Richard (Leslie) Dunham. He was predeceased by his parents; and brothers, Robert Strang and Russell Granger. Friends are encouraged to support Ron's family. Funeral services are Friday, February 7, 2020 at 11:00 AM at Pray Funeral Home in Charlotte with Pastor Charles Jenson officiating. Visitation is Thursday, February 6, 2020 from 5 to 8:00 PM. If desired, the family suggests memorial contributions to Eaton Community Palliative Care or Eagles Community Dinners (FOE Aerie 3552). Friends and family are encouraged to share memories of Ron on his Tribute Page at www.PrayFuneral.com. The family is in the care of Pray Funeral Home, Charlotte.

The family of Ronald 'Ron' Dale Granger created this Life Tributes page to make it easy to share your memories.

Send flowers to the Granger family.