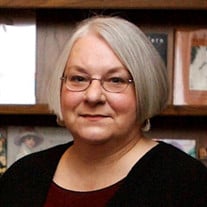 Sheila Terese Elizabeth Accivatti, beloved wife, mother, grandmother and friend, passed away Tuesday, March 31, 2020, after a long illness. She was 71 years old. Sheila was born Dec. 25, 1948, to Tosca Lidia Marie Barsi Sathoff and her husband. Sheila's younger brother, Kirk, arrived several years later, and they grew up together in Sterling, Illinois. Sheila attended Newman Central Catholic High School, graduating in 1967. Sheila's mother, Tosca, married Owen Hagen in December 1969, and he became a loving father to Sheila and Kirk in every meaningful way. Through Tosca and Owen's union, Sheila gained three siblings: Michael, Nancy and Jodi. After high school, she studied nursing at St. Anthony Hospital School of Nursing in Rockford, Illinois. During that time, she met her first husband, David LaLumia, who she married in November 1972. Together they had two daughters, Cara and Julia, and they divorced after 11 years of marriage. Sheila cared for her daughters as a single parent for a number of years and did so with aplomb. On Nov. 9, 1985, two families again became one when she married James Accivatti and became a mother figure to daughters Theresa and Kathryn. Sheila and Jim had a love that was always sincere and usually playful, through both tough and easier times over more than 35 years. They showed by example how to nurture a relationship through life's ups and downs with affection and good humor. Sheila loved her family near and far. She was known to make unannounced trips to Sterling to surprise her mother, at least once during a blizzard aided by brother-in-law Bud LeFevre. She made untold sacrifices for her children, and her grandchildren were her joy and her reward. Sheila was a woman of words. She was a lifelong writer with a deep appreciation for the craft. She was the storyteller of her family, weaving together loose ends from lives left behind in Italy, a mid-century coming-of-age in Illinois, and growing a new life with permanent roots in Michigan. Each letter, birthday card and lunchbox note she wrote was a small piece of art—always thoughtfully and lovingly composed. She also was a gifted crocheter, who made many beautiful baby blankets and afghans that her family will treasure for years to come. Sheila was preceded in death by her brother, Kirk Sathoff, and her parents, Owen and Tosca Hagen. She is survived by her husband, Jim Accivatti, of Charlotte; daughters Cara (Jason) Barnes of Richland, Julia LaLumia of Lansing, Theresa Accivatti of West Bloomfield, and Kate (Jeff) Schamanek of Rochester; former husband David (Julie, Luke, Nathan, Zachary) LaLumia of Eagle; grandchildren Zachary, Melissa, Jessica, Allisyn, Jackson, Theodore, Ava and Eleanora; and siblings Mike Hagen of Southport, NC, and Nancy (Ron) Jensen, Jodi LeFevre, and Bud (Lisa) LeFevre, all of Sterling, IL; as well as many loved nieces and nephews. A memorial service will be held later this year to celebrate Sheila's life. In lieu of flowers, please consider a donation to the American Diabetes Association, P.O. Box 15829, Arlington, VA, 22215.

The family of Sheila Terese Accivatti created this Life Tributes page to make it easy to share your memories.

Send flowers to the Accivatti family.