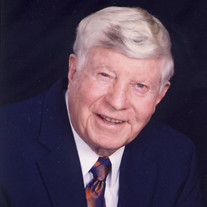 Sherman Ceyland Kelley, of Charlotte, a family man of integrity, passed away on July 13, 2018 in Charlotte, at the age of 84. He was born on January 26, 1934 to Ceyland and Edla (Sherman) Kelley in Charlotte, MI. Sherm attended Charlotte High School, graduating in 1952. On January 9, 1954 he married Marcelyn Baker in Charlotte. Following High School he joined the U.S. Army where he became an instructor for soldiers during basic training, preparing them for the Korean War. Sherman worked for General Motors for over 30 years retiring in 1987 as a Plant Superintendent. His coworkers remember Sherm as a likeable, gentle person who could be tough when needed. It was through his fair treatment for all that he earned the respect of his co-workers. For a number of years he was active on the General Motors Supervisors Council, at one time serving as it’s Chairman. Sherm loved spending time with his family. As a loyal U of M fan in a divided household he often traded barbs with his son and granddaughters over MSU sports. He was also a loyal fan of the Detroit Tigers. He loved traveling with his family throughout the United States. Marcelyn remarked that they had traveled to 49 of the United States. Their favorite ones were Hawaii and Alaska. Sherm and Marcelyn were active through their church participating in numerous work camp mission trips over the years. Above all Sherm was most proud of his family, his children and grandchildren. Sherman is survived by his wife, Marcelyn; daughter, Kimberly (Randy) Howe; son, Kris (Jan) Kelley; two granddaughters, Melissa (Sivad) Howard, Skye Kelley; two grandsons, Jason Whetstone, Chandler Kelley; 2 great-grandchildren, Ashton Whetstone and Londyn Howard; and sister, Darlene (Dwight) Pierce. He was preceded in death by father, Ceyland Earl Kelley; mother, Edla Marie Kelley; and brother, Darwin Earl Kelley. Visitation is Tuesday, July 17, 2018, 2-4:00 PM & 6-8:00 PM at Pray Funeral Home, Charlotte, MI. Visitation on Wednesday, July 18, 2018, 10:00 AM with services to follow at 11:00 AM at the Lawrence Avenue United Methodist Church, Charlotte, MI, with Rev. Gary Wales officiating. If desired, the family suggests memorials to Lawrence Avenue United Methodist Church or Heartland Hospice of Michigan. The family is in the care of Pray Funeral Home, Charlotte. Family and friends are encouraged to share remembrances and condolences online in Sherman's Tribute Page at www.prayfuneral.com.

Sherman Ceyland Kelley, of Charlotte, a family man of integrity, passed away on July 13, 2018 in Charlotte, at the age of 84. He was born on January 26, 1934 to Ceyland and Edla (Sherman) Kelley in Charlotte, MI. Sherm attended Charlotte High... View Obituary & Service Information

The family of Sherman Ceyland Kelley created this Life Tributes page to make it easy to share your memories.

Sherman Ceyland Kelley, of Charlotte, a family man of integrity,...

Send flowers to the Kelley family.