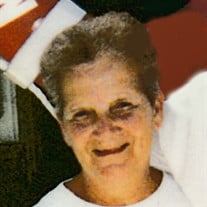 Shirley Ann Kyre, 85, a feisty little lady of Grand Ledge, formerly of Charlotte, died Sunday, April 19, 2020 in Lansing. Shirley was born May 25, 1934 in Grafton, West Virginia, the adopted daughter of Bordman Walton and Anna M. (Detrick) DeWitt. She graduated from Fairmont High School before marrying George Ray Kyre and the two started their family. They moved to Maryland, and eventually Charlotte, MI, where Shirley worked for many years at Wildern's Drug Store and at Weymouth Elementary School, where she was both feared and loved by students and teachers alike. She and George enjoyed spending time up north in Harrison, MI, and travelling. George would do anything for Shirley, including buying her a Ford Mustang, which he continually kept clean while she drove it around town in style, even though she had to scoot her seat all the way up and pull herself up over the wheel to be able to see! On most Fridays, you could catch her at either a CHS Football Game or a CHS Basketball Game where George and his buddy Gordon would be working on statistics for the local paper and she would be tossing back a box of popcorn. She and George were huge WVU fans and they would drive back to West Virgina from Michigan for most home Mountaineers football games. In the fall she would have football on all day long both college and NFL. Her favorite teams being WV, MSU, Steelers and the Lions. When George died in 2002, a part of Shirley faded as well but she never lost her spunk, she was still Shirley. Shirley liked to play tough, but she was one of the most caring and loving women one could have ever met. The last couple years of her life she made a lot of new friendships, and was involved in community activities such as bingo, and exercise classes, which she would brag that she could do more than the 60, 70 year-olds in her building. Although many will miss her, the many "Shirley Stories" will live on in her memory. Shirley is survived by her son Russ; grandchildren, Cassi (Frank) Hobyak, Jamie Kyre, Jon-Eric Kyre, Carly Kyre, Donny Kyre, and Logan Kyre; great-grandchildren, Jaydin, Kalin, Mitchell, Jameson, and Spencer; daughter-in-law, Jackie Kyre; and her grand-dog, Ace. She was predeceased by her husband, George; and two sons, Jon Kyre and Mike Kyre. Visitation will take place on Wednesday, April 22, 2020 from 11:00 a.m. - 1:00 p.m., followed by interment at Maple Hill Cemetery in Charlotte, where she will be laid to rest alongside George. If desired, the family suggests memorial contributions to the Tri-County Meals on Wheels. Friends and family are encouraged to share memories of Shirley on her Tribute Page at www.PrayFuneral.com. The family is in the care of Pray Funeral Home, Charlotte.

The family of Shirley Ann Kyre created this Life Tributes page to make it easy to share your memories.

Send flowers to the Kyre family.