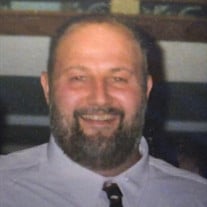 Terry "Yogi" Klont, a wonderful husband, father, and friend, died peacefully on Friday, June 18, 2021, from complications of Parkinson's Disease and Dementia surrounded by his family. Terry, 60, was born August 20, 1960, in Charlotte, MI, the son of Pete and Judith (Bailey) Klont. He graduated from Charlotte High School in 1978. On October 8, 1988 Terry married Sondra McCormick. Terry worked at General Motors as a Journeyman Tool and Die Maker. He retired from there with more than 30 years of employment. Terry was active in the Charlotte Junior Orioles, girls high school golf, and teaching Special Olympics golf. He was also a past member of the Sons of the American Legion. He owned Klonts Kustom Klubs, where he made golf clubs, and Klonts Kustom Kooking, which he operated with his brother Jeff. Since his retirement he and Sondra and family enjoyed many years at their lake house. He was very proud of all of his grandchildren. He was known as the life of the party and always had a joke to tell. Besides his family Terry's second love was golf. For 26 years he organized the Yogi Invitational golf outing. Terry is survived by his wife, Sondra; sons, Gene (Selena) Bennett, Todd Klont, Steve (Lisa) Klont, Scott (Anne) Belanger; daughter, Jenny (Brian) Bingaman; grandchildren, Landon, Bailey, Kiley, McKale, Smith, and Brynne; brothers, Jeff (Debbie) and Pete (Lauri); niece, Kelsey; nephews, Jacob and Karson; father-in-law, Gene McCormick; and Aunt, Marion Jones. He was predeceased by his parents. Uncle Rod Klont, and mother-in-law Virginia McCormick. Friends are encouraged to support Terry's family by sharing memories on his Tribute Page at www.prayfuneral.com. At Terry's request, there will be no service or visitation. Cremation has taken place. If desired, the family suggests memorial contributions to Michigan Parkinson Foundation or Charlotte Athletic Boosters. The family is in the care of Pray Funeral Home, Charlotte.

The family of Terry "Yogi" Klont created this Life Tributes page to make it easy to share your memories.

Send flowers to the Klont family.