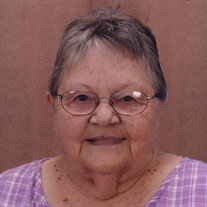 Vivian June Ulrich, a Bible toting, pie making woman who shared her faith with everyone, passed away on April 3, 2022. Vivian was born on July 3, 1935 to Robert Lee and Constance Elaine (Hoar) Backus in Harbor Springs, Michigan. Vivian was a trusted friend and was treasured for being a brutally honest, yet a fair and loyal friend who always listened. Vivian is remembered for an unending list of skills and abilities. She knit afghans while watching true crime shows on TV. Vivian drove for Okemos School until 1972, earning a 'Bus Rodeo Trophy.' Later she and her husband ran a farm where Vivian maintained equipment, and tended chickens and goats. Later she had a short stint at General Motors followed by a position as a housekeeper, cleaning up to three homes a day. There was little Vivian didn't tackle and succeed at in her life. Food was a specialized talent for which her family and friends were glad to share in. It was not at all uncommon to find multiple delicious pies being baked in her kitchen… apple and pecan pies were family favorites. Her priorities in life were faith, family and food. As an avid reader she read her entire Bible every year. Learning of the love of Jesus, Vivian was saved at the age of 50 and became a Chaplain in Eaton County Jail's Forgotten Man Ministry. Vivian was especially proud of the family legacy of her grandfather, Daniel Backus, being the lighthouse keeper on South Manitou Island, Michigan and her grandmother, Almeda Backus, taught school on the island. Vivian is survived by her daughter, Paula (Daryl) Steele; son, Robert (Dorian) Reed; nine grandchildren and many great-grandchildren; sisters, Viola Cook, Victoria Pereida and Valerie Howell. She was predeceased by her parents; daughter, Reina Mazzoni; son, Randy Reed; sisters, Vida Hale, Velda Pacquet; and grandson, Troy Mazzoni. Visitation and memorial services will be held at the First Baptist Church of Sebewa, 13010 S. Goddard Road, Lake Odessa on Friday, April 8, 10-11 a.m. for visitation and 11:00 a.m. memorial service with Pastor Greg Mattson officiating. If desired, the family suggests memorial contributions to Eaton County Health and Rehab Services (ECHRS). Family and friends are encouraged to share remembrances and condolences online in Vivian's Tribute Page at www.prayfuneral.com. The family is in the care of Pray Funeral Home, Charlotte, MI.

Vivian June Ulrich, a Bible toting, pie making woman who shared her faith with everyone, passed away on April 3, 2022. Vivian was born on July 3, 1935 to Robert Lee and Constance Elaine (Hoar) Backus in Harbor Springs, Michigan. Vivian was... View Obituary & Service Information

The family of Vivian June Ulrich created this Life Tributes page to make it easy to share your memories.

Send flowers to the Ulrich family.