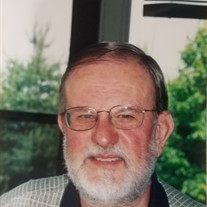 William Wallace "Wally" Bullard, 82, of Charlotte, a man of kindness and humility, passed away peacefully on the morning of Thursday, February 3, 2022. Wally was born February 23, 1939 in Wayne, MI, the son of Arthur Martin and Eula (Burger) Bullard. He grew up in Canton, MI, and graduated from Plymouth High School in 1957. Wally briefly attended Eastern Michigan University before he was drafted into the U.S. Army and stationed in Korea. Upon his return from the service, he attended Wayne State University and earned a bachelor degree in Anthropology and Sociology. On November 4, 1966, Wally married the love of his life, Kathryn Elizabeth Campbell, and the two started their family. Wally served as a probation officer for Wayne and Oakland Counties. Following retirement, he and Kathy moved to Las Vegas, where Wally competed in the World Series of Poker. While in Nevada, Wally even served as a delegate to the 2008 State Democratic Presidential Caucus. They returned to Michigan and settled in Charlotte, to be near their son, Wally, and their grandchildren. Wally continued his love of poker, as well as golf, playing in multiple leagues at Centennial Acres until his health restrained him. He loved the music of Hank Williams and Jimmy Rogers, and was extremely well-read and knowledgeable of history. All who met and knew Wally loved him, and he lived a life devoted to his family. Wally is survived by his wife of 55 years, Kathy; son, Wally (Melanie Anderson) Bullard; and grandsons, Stanley Bullard and Adrian Stadler. He was predeceased by his parents. Friends are encouraged to support Wally's family by sharing memories on his Tribute Page at www.prayfuneral.com. Private interment will take place at Center Eaton Cemetery followed by an online memorial event that is being planned. Details are forthcoming. Friends are encouraged to go out to lunch in memory of Wally, or if memorial contributions are desired, Salvation Army is suggested. The family is in the care of Pray Funeral Home, Charlotte.

William Wallace "Wally" Bullard, 82, of Charlotte, a man of kindness and humility, passed away peacefully on the morning of Thursday, February 3, 2022. Wally was born February 23, 1939 in Wayne, MI, the son of Arthur Martin and Eula (Burger)... View Obituary & Service Information

The family of William Wallace Bullard created this Life Tributes page to make it easy to share your memories.

William Wallace &quot;Wally&quot; Bullard, 82, of Charlotte, a man of kindness...

Send flowers to the Bullard family.