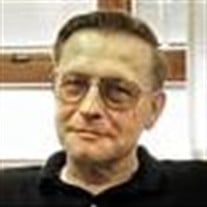 William “Bill” Donald Siarny, Jr., 74, a kind-hearted man of integrity and intelligence, died peacefully on the morning of October 1, 2019 in the comfort of his Charlotte home. Bill was born April 11, 1945 in Chicago, the son of William D. and Ann Eve (Walczyk) Siarny. He attended DePaul University, earning a Bachelor Degree in History and Geography. He also studied two years at Dominican University, earning a Master’s in Library Science. Bill’s career as a librarian and archivist began at the Oak Park Public Library. He then worked at the Northwestern University Library, the National Dairy Council, and managed the world’s largest library about meat at the National Cattleman’s Beef Association, serving 20 years as the archivist for the American Meat Science Association. Throughout his career, he was a member of the American Library Association, the Society of American Archivists, the Medical Library Association, and the Special Libraries Association. Bill was also passionate about cartography, collecting many beautiful maps and participating the American Association of Geographers. He was a member of the American Historical Association and the American Association for the Advancement of Science. Bill married Cynthia Ann Skarbek on October 6, 1973 in Niles, MI, and the two started their family in Oak Park, IL. He served in the Army Reserves from 1965 to 1974 as a Warrant Officer and Assistant to the Adjutant General. In 2000, Bill and Cynthia moved to Charlotte, MI, where Bill became Director of the Charlotte Community Library, a position he held until his retirement in 2013. Bill was active in the Charlotte community, including the Charlotte Optimist Club, City of Charlotte Planning Commission, and St. Mary Catholic Church, where he was a devoted member of the Knights of Columbus, served as a Minister of Care, and led the Cursillo Leaders’ Group. In his spare time, he loved reading every book he could find, puttering around the house, and dreaming of moving to a lighthouse in Maine. Bill is survived by his sons, Gerard Brendan Siarny, David Basil (Julie) Siarny, and Matthew Alexander (Michiko) Goto; daughter, Elizabeth Maureen (Jerrod Lowmaster) Siarny; 4 grandchildren; and sisters, Elizabeth Siarny and Victoria (James) Hosler. He is predeceased by his wife, Cynthia in 2011; their daughter, Monica in 2005; and his parents. Friends are encouraged to support Bill’s family at visitation and funeral services. A Funeral Mass will be celebrated at 11:00 a.m. on Saturday, October 5, 2019 at St. Mary Catholic Church in Charlotte with Rev. Fr. David Rosenberg officiating. Visitation will be from 3:00 – 5:00 and 6:00 – 8:00 p.m., with a Rosary at 6:30 p.m. on Friday, October 4, 2019 at Pray Funeral Home, Charlotte. Interment will take place at St. Michael Cemetery in Holbrook, Iowa. Memorial Contributions may be made to St. Mary Catholic Church in Charlotte or the Charlotte Community Library. Friends and family are asked to share memories of Bill on his Tribute Page at www.PrayFuneral.com. The family is in the care of Pray Funeral Home, Charlotte.

The family of William 'Bill' D. Siarny Jr. created this Life Tributes page to make it easy to share your memories.

Send flowers to the Siarny family.