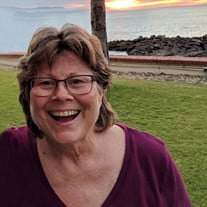 Carol Atkins, a fun-loving and supportive daughter, sister, friend, and teacher died on Wednesday, August 18, 2021, after a five-year battle with cancer. Carol. 63, of Pattersonville, New York, was born on September 5, 1957, in Charlotte, Michigan. She was the daughter of Warren and Julie (Schafer) Atkins. After graduating from Charlotte High School Carol earned her undergraduate degree from Central Michigan and then a master’s degree from the State University of New York at Cortland. Carol devoted her life to teaching and coaching. She began her career in Schenectady Catholic Schools. She continued in Scotia Glenville Central Schools teaching at both the middle school and at the elementary level. Coaching was a passion for Carol, and while at Scotia Glenville Carol coached softball and volleyball for many years. Carol retired in 2016. Carol was active in the Scotia Glenville Teachers’ Association and the New York Association of Health, Physical Education, Recreation, and Dance, where Carol was a past president of the Capital Zone. In recent years Carol was also active in her support of Camp Bravehearts, an oncology camp for women. Carol was an avid tennis player. She also enjoyed traveling with family and friends, participating in book and movie clubs, working in her flower garden, listening to music, and most importantly, spending time with family and friends. Carol is survived by her father, Warren (Ronni) Atkins, siblings Beverly (Will) Spencer, Gary Atkins, Steve (Carol) Atkins, Jamie ((Angie) Atkins, Tina Atkins, nieces and nephews Gary Atkins,Jr., Annjanette (David) Warren, Jordan Shook, Zackery (Kendra) Shook, Taylor Shook, Conor (Emma) Atkins, Kendyll Atkins, great nieces and nephews, Anslee Atkins, Lillianna Shook, Harper Shook, and Jaxton Warren; and her four-legged companion, Nellie. Carol was predeceased by her mother, Julie Atkins, in 2018. Memories of Carol may be shared on her Tribute page at www.prayfuneral.com. A memorial service will be held on Saturday, August 28, 2021, at 2:00 p.m. in the Pray Funeral Home Gardens in Charlotte with Pastor Charles Jenson officiating. Visitation will be held prior to the service and beginning at 12:00 noon. The funeral will be webcast and can be viewed from any device with internet access by going to www.prayfuneral.com. Click on Carol’s tribute, and then click on photos and videos. A memorial service is also being planned for Carol at a later date in New York. The family has suggested that memorial contributions be made to Camp Bravehearts, 19 Cambridge Road, Albany, New York 12203 or Braveheartscamp.org. The family is in the care of Pray Funeral Home, Charlotte.

The family of Carol A. Atkins created this Life Tributes page to make it easy to share your memories.

Send flowers to the Atkins family.