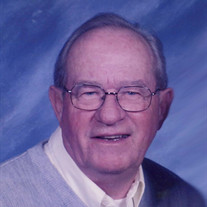 Gerald F. (Jerry) Lehman, 81, passed away on December 11, 2020 in Lansing, his life cut short by Covid-19. He was born January 28, 1939, in Clarkston, Michigan, the second son of Percy and Ruth Lehman. At the age of 6 he moved with his family to Roscommon, a small northern community. After graduating from high school, he first attended Western Michigan University. Later transferring to MSU, he and Dyna Parmenter, the love of his life, were married Dec. 15, 1962. Jerry was also the love of Dyna’s life and they were together for 63 years and came 4 days short of celebrating their 58th anniversary. Upon earning a B.A. Degree in Art at MSU, Jerry joined the former Michigan Highway Dept. as a graphic artist. From there he took his artistic skills to the DNR launching a career that spanned 23 years in parks and wildlife programs. Upon retirement in 1992, Jerry was commended by the Michigan Legislature in a resolution citing his public service on behalf of the state’s tourism and recreational interests. Over the years, Jerry was a loving and devoted husband, father, and grandfather. His three daughters’ credit him for inspiring them artistically while blessing their lives with a steady hand of support and sharp sense of humor. Friends and others who had the pleasure of knowing Jerry admired him for being easy going and good natured. He was also well regarded for his big heart in helping others. Another plus was his dry humor which he made ample use of with loved ones, much to their delight. Jerry enjoyed tinkering with things and was blessed with an abundance of patience to see them through successfully. This story started with him spending countless hours as a child building model airplanes. It stretched into devoting two decades in his senior years to renovate his treasured 1967 Pontiac Firebird convertible! Not only did Jerry have the fortitude to delve into intricate undertakings, but he also had the skills to fix, modify or upgrade projects. He applied this special knack to home improvements throughout his life. For good measure, he was Mr. Fix-It in answering handyman needs of his grown children. Jerry took on a lifelong love of golf tracing back to his Roscommon childhood when his parents acquired and brought back into play, an abandoned golf course now known as Ye Olde Country Club. Many years later, as a seasoned ball striker, he had his shining moment in golf: a hole in one at Royal Scot in the Lansing area. Jerry and Dyna spent the last 20 years wintering in Orange Beach, AL playing golf and making more wonderful friends. The cherished life of Jerry will live on in the hearts of his wife, Dyna; daughters, Raelee (Ron) Edgar, Lisa (Kevin) Chapin, and Pam (Dale) Nutt; granddaughters, Dani (Max) Larson, Brianne Edgar, and Sydney Nutt; grandsons, Matt Edgar, Nick and Connor Chapin, Tyler, Keegan, and Mitch Nutt; great-granddaughter, Molly Larson; brother, Dick Lehman; brothers and sisters-in-law, Bruce Parmenter, Louise (Jerry) Hall, Vivian (Peter) Reed, Tom (Margaret) Parmenter; nieces and nephews, Kevin, Karen, and Julie, Bruce Jr., Maureen, Glenn, Elaine, Ken, and Dale, Paula. Jennifer, Todd, and Brian; plus, many great nieces and nephews; as well as cousins, Frank, Tom, Brian, Mary Jo, and John. A Private Family Celebration of Life will be held Tuesday, December 15, 2020 at Pray Funeral Home. A memorial service will be held in 2021 in Roscommon, MI. If desired, the family suggests memorial contributions in Jerry’s honor to the First Congregational Church, 106 S. Bostwick St., Charlotte, MI 48813. Friends and family are encouraged to share memories of Jerry on his Tribute Page at www.PrayFuneral.com. The family is in the care of Pray Funeral Home, Charlotte.

The family of Gerald Lehman created this Life Tributes page to make it easy to share your memories.

Send flowers to the Lehman family.