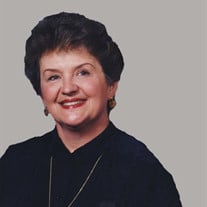 Juadean "Judy" M. Dahlgren, 80, a women full of compassion for others and endless love for her family, died peacefully on Monday, July 20, 2020, with family by her side at home on the farm in Potterville. Judy was born August 31, 1939, in Lansing, the daughter of Edward and Evelyn (O'Dell) West. She graduated from Charlotte High School in 1957 and on November 9 of the same year married Richard Dahlgren and they settled into family life on the Dahlgren farm in Potterville. She worked 21 years as a well-known server at the Pour House Restaurant in Windsor Twp., as well as laboring alongside her husband on the farm. Judy loved sitting on the porch at the house with her family and friends, enjoying the flowers. Throughout the years, her family usually included several kids from the community keen on spending time outdoors around the farm with the Dahlgren children. Additionally, she cared for her "little people," the many elderly she regularly checked in on and supported. Her love for people was rivaled only by her love of animals. She lived a life full of attention to the needs of others, and devotion to her children and grandchildren. Her hard work only allowed for 3 days of vacation each year, which she and Richard always spent enjoying Mackinac Island. Many will remember Judy's wisdom and love, and her role as protector and nurturer to her large family and friends. Judy is survived by her children, Richard (Pam Jones) Dahlgren II, Kim (Rebecca) Dahlgren, Cynthia (Scott) Lucas, and John (Joellen Wright) Dahlgren; 10 grandchildren, Danielle Dahlgren, Audrey Dahlgren, Avery Dahlgren, Dalton Wertz, Kyle Lucas, Rachel (Daryle) McMaster, Corey Lucas, Preston (Missy) Dahlgren, Terra (Larry) Coffman, and Jerrid (Sabrina) Dahlgren; 12 great-grandchildren; sister, Jane West; sister-in-law, Cathy West; and her nieces and nephews. She was predeceased by her husband, Richard D. Dahlgren in 2017; her parents; brothers, Jim West and Jerry West; sister-in-law, Donna West; and infant granddaughter, Phoebie Dahlgren. A private family gathering will take place on the farm. The family also wishes to especially thank Chelsea from Elara Caring Hospice for her compassionate care of Judy. Friends and family are encouraged to share memories of Judy on her Tribute Page at www.PrayFuneral.com. The family is in the care of Pray Funeral Home, Charlotte.

Juadean "Judy" M. Dahlgren, 80, a women full of compassion for others and endless love for her family, died peacefully on Monday, July 20, 2020, with family by her side at home on the farm in Potterville. Judy was born August 31, 1939, in Lansing,... View Obituary & Service Information

The family of Juadean 'Judy' Dahlgren created this Life Tributes page to make it easy to share your memories.

Juadean &quot;Judy&quot; M. Dahlgren, 80, a women full of compassion for...

Send flowers to the Dahlgren family.