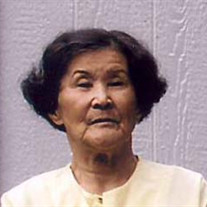 Reiko (Okano) Davis, of Charlotte a strong willed woman with a natural sense of humor, passed away on June 9, 2021 at the age of 90 in San Antonio, TX with her daughter, son-in-law and grandson by her side. She was born April 14, 1931 in Tobata Japan, the first daughter of Shigesumi and Yoshiko (Hara) Okano. In spite of growing up in Japan during World War II, Reiko had a rich and full life. She learned to always look to the future no matter what was happening in the present. Reiko grew to be an independent person with a sense of humor that brought smiles to everyone around her. Reiko met Roy E. Davis who was serving in Japan with the U.S. Army. They were later married at the American Embassy in Tokyo, Japan on December 2, 1954 and moved to the USA in 1955, settling down in Charlotte, MI. Besides raising their three children, Reiko was employed at the Eaton Manor for many years, retiring in 2003. One of her proudest moments was when she became a U.S. citizen in April 1980. Reiko was always in constant motion. At home she would tend to the flowers surrounding their home. And speaking of their home, she kept it spotless and expected everyone else to do the same. Her family remembers how Reiko was a sports addict, enjoying watching college and professional sports, especially professional basketball. A true animal lover, Reiko adopted many furry friends over the years, but had a special affection for dogs and cats. Family was first and foremost in Reiko’s life. She loved gathering everyone together for dinner whether going out to eat, or hosting one of the many memorable gatherings at home. Her children remembered her love of travel and recall many trips in the family camper to visit the sites in Michigan and the Midwest. Reiko is survived by her sons, Michael (Joyce) Davis of Charlotte, MI and Mitchell Davis of Charlotte, MI; daughter, Michella (Michael) Wheat of San Antonio, TX; grandchildren, Shawn Davis, Scott Davis, Dyanne (Wheat) Bongiovanni, Marilyn (Wheat) Thompson, Rayce Wheat, Alex Hughes, Alana (Hughes) Ruvolo; and 12 great-grandchildren. She was preceded in death by her husband, Roy E. Davis in 2002. Friends are encouraged to support Reiko’s family by attending the visitation or memorial services, or sharing memories on her Tribute Page at www.prayfuneral.com. Visitation is Thursday, July 29, 2021, 6-8:00 PM at Pray Funeral Home in Charlotte. Reiko’s memorial service will be celebrated at 11:00 AM, Friday, July 30 at Pray Funeral Home with Laura Cooper as Celebrant. If desired, the family suggests memorial contributions to Potterville Humane Society or Eaton Community Palliative Care. The family is in the care of Pray Funeral Home, Charlotte.

Reiko (Okano) Davis, of Charlotte a strong willed woman with a natural sense of humor, passed away on June 9, 2021 at the age of 90 in San Antonio, TX with her daughter, son-in-law and grandson by her side. She was born April 14, 1931 in Tobata... View Obituary & Service Information

The family of Reiko O Davis created this Life Tributes page to make it easy to share your memories.

Reiko (Okano) Davis, of Charlotte a strong willed woman with...

Send flowers to the Davis family.